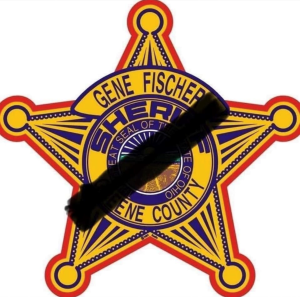 Sheriff Gene C. Fischer, age 65 and a lifelong resident of Greene County, passed away suddenly Tuesday, November 16, 2021.  He was born June 23, 1956 in Xenia, the son of the late Raymond and Irma (Krumm) Fischer.

In addition to his parents, he was preceded in death by two brothers, Ray Fischer and Neil Fischer. Survivors include his wife of 38 years, Gail; his daughter, Brittany; sister, Janice (Ervin) Collinsworth; sister-in-law, Cheryl (Neil) Fischer; sister-in-law, Liz (Judson) Shattuck; several nieces and nephews; as well as his extended family and many friends.

Sheriff Fischer’s law enforcement career began with the Fairborn Police Department as a volunteer officer. Gene was hired as an officer in 1983 with the Xenia Police Division and on June 30, 2003, while a Sergeant at Xenia, Gene was selected by the Greene County Republican Central Committee to serve as the Sheriff of Greene County. Sheriff Fischer was extremely honored and proud to serve the residents of Greene County and was re-elected five times to the office.

Over the years, Sheriff Fischer was very active with many organizations; Past President of the Buckeye State Sheriff’s Association (BSSA), the Fraternal Order of Police, Xenia Lodge No. 49 F&AM and a 33rd Degree recipient, Scottish Rite Valley of Dayton, Fairborn Shrine Club. Gene was an inductee of the Fairborn City Schools Hall of Honor, was an Amateur Radio Operator, and enjoyed being a part of the Greene County Fair every summer.  Gene and his wife attended Xenia Nazarene Church.

An opportunity for community members to pay their respects to Sheriff Fischer will be held on Tuesday, November 23, 2021 from 4:00 until 7:00 P.M. at the Xenia Nazarene Church, 1204 W. 2nd St., Xenia.  A Masonic service will be held at the church at 7:00 P.M. A service to celebrate his life as well as his law enforcement career will be held on Wednesday November 24, 2021 at 11:00 A.M. at the James T. Jeremiah Chapel of the Dixon Ministry Center at Cedarville University, Pastor Mark Atherton officiating.  Burial with full honors will follow at the Byron Cemetery, Fairborn.

In lieu of flowers, memorial contributions may be made to the Greene County Youth Activity Fund, Michael’s House, Fisher House, or a charity of the donor’s choice.  Arrangements in care of Belton-Stroup Funeral Home, Fairborn.